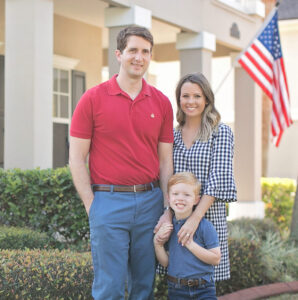 Appointed in December 2019 by Governor Ron DeSantis, Brandon Patty serves as clerk of the circuit court and comptroller for St. Johns County. In this role, he manages a $7.5 million budget and a staff of 100 responsible for more than 1,000 constitutional and regulatory duties – everything from maintaining court records to issuing passports and marriage licenses. Since his appointment, Patty has reinforced the office’s focus on providing superior customer service, serving as auditor and custodian of county funds, maintaining county records and partnering with the court system on behalf of all St. Johns County residents.

Patty brings significant leadership and management experience from the private sector and the military to his role as clerk of court and comptroller. In addition to serving most recently as director of operations for St. Augustine-based Defenshield, he worked with some of America’s largest companies as a consultant for Deloitte. Previously, he served as a special assistant to Gov. Jeb Bush and as policy director for U.S. Sen. Marco Rubio.

A lieutenant commander in the U.S. Navy Reserve, Patty has served on active duty at the National Maritime Intelligence-Integration Office in Washington, DC and in the Middle East in support of Operation Enduring Freedom. He currently serves as an Information Warfare Officer at Naval Air Station Jacksonville.

Patty is a second-generation Floridian and the first member of his family to graduate from college, earning a bachelor’s degree from George Washington University and a master’s degree from the London School of Economics.

He lives in St. Augustine with his wife Brittney, stepson Mason and their two dogs, Roscoe and Howie.

Champion and pursue adding county
and circuit judges at home.

Ease access and physical space for records
and invest in backing up records management.

Gov. Ron DeSantis announced the appointment of Brandon Patty as St. Johns County Clerk of Court and Comptroller on Monday. Patty is the chair of the St. Johns County Republican…
brandonpatty
Love0